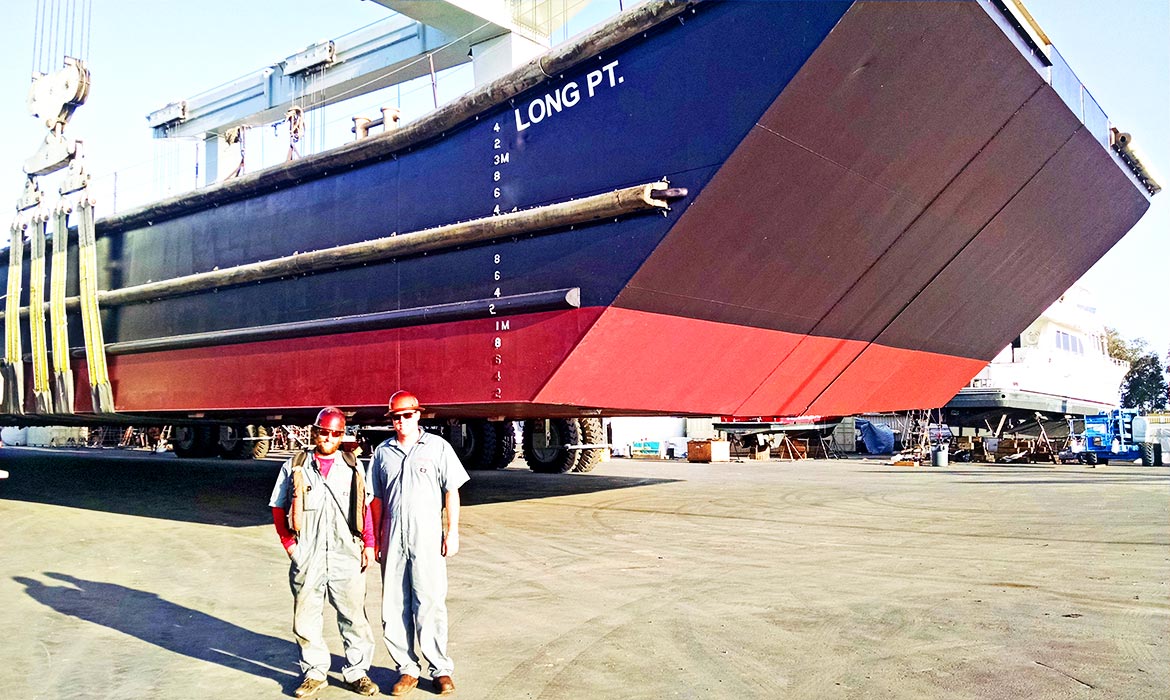 The first load of steel was delivered to our Long Beach Facility in early October, and its arrival initiated the process of fabricating the individual modules that would eventually come together and form the completed barges.

The strategy for barge construction was conceived long before the first trucks unloaded; although a project of this nature had not been attempted before, Curtin Maritime’s innovative team was ready to take on the challenge.

Owner Martin Curtin and Chief Engineer Jason Burcombe first identified a pair of barges that would be suitable for conversion and began the design engineering. Along with our design partners, Jensen Maritime in Seattle, a detailed conversion plan, and assembly sequence was laid out. With the barges having 100% scantling and over 65% new steel per vessel, the scows were classed as “new” vessels and given new build dates by DNV/GL. One of the key components of the build plan was to reduce costly shipyard time. In order to accomplish this, the assembly was split into two phases, the in-water phase, and out-of-water phase. The new steel, over 1.5 million pounds, was to be assembled into 28 separate modules per barge and were built in our Long Beach yard. Ten of them, composed of the upper hopper and bulwarks, was able to be installed while the barges were still afloat at our dock in Long Beach.

The barges were then hauled at Marine Group Boat Works in Chula Vista to complete Phase 2; this is when the real work began. The barges were bisected down the center line by hand and rolled apart. One side remaining fixed on blocking while the other was rolled to starboard on a dolly system. Once apart, the remaining 1.3 million pounds of centerline, hinge and rake modules could be installed. The overall alignment of all the components was critical for both hinge operation and proper sealing of the hopper. Both cranes from above and hydraulic jacks on the underside were used to guide the modules, including the 56K pound hinge boxes into place for welding. While module install was in full swing, painting, piping and the completion of the engine and hydraulic systems were done. From initial haul out of barge one to launching of barge two, total shipyard time was only 10 weeks. The well sequenced assembly along with the hard work of our crews made this possible. We are very proud of this project, as it a fantastic example of the full-range of capabilities that Curtin Maritime has as a shipyard and marine construction company.